The History of Thanksgiving Sailing

By Damion SteinNovember 16, 2018 No Comments

Although many inaccurately celebrate Christopher Columbus as a great explorer who discovered America, the fact is this Italian viceroy who managed to merit himself a federal holiday in the modern United States through a lot of fairy tale and folklore never even made it to North America.

In fact, in the course of four separate trips—seeking his own wealth and fame through the support of his Portuguese benefactors—Columbus landed on various Caribbean islands and explored the Central and South American coasts where he enslaved and terrorized native people. He did not, however, discover America, which was in fact already inhabited by Native Americans.

In August, 1492, Columbus and his crew set sail in three ships nicknamed the Nina, Pinta and Santa Maria. These ships known as caravels were quite different from the modern ships and sailboats used for travel, fishing or simply leisurely Thanksgiving sailing.

The caravel, developed around 1451, was designed based on existing fishing boats. Smaller and having a shallow keel, these vessels were agile and easy to navigate. Caravels were generally 50-160 tons with 1 to 3 masts allowing them to sail upriver and in shallow coastal waters—ideal for exploring the Bahamian islands. With lateen sails attached, caravels were highly maneuverable near the shore, and with the square Atlantic-type sails attached these small vessels were quite fast as they made their way across the ocean.

The speed, agility, economy and power made these broad-beamed vessels the chosen sailing ship of the 15th century time. The only drawback appeared to be a limited capacity for cargo and crew, but even that did not hinder the caravel’s use for many successful explorations.

Over the years, the overall design underwent some changes, including later additions of a 4th mast—for running before the wind—and a double tower at the stern. The early exploring ships were smaller and lighter than the Spanish galleons of the 16th century, and in later years “caravel” was used to describe smaller fishing boats along the coast of France as well as the Turkish man of war.

The average speed of the caravel was about 4 knots and it reached top speed of about 8 knots which is pretty comparable to modern sailing ships. This equates to about 90-100 miles per day. 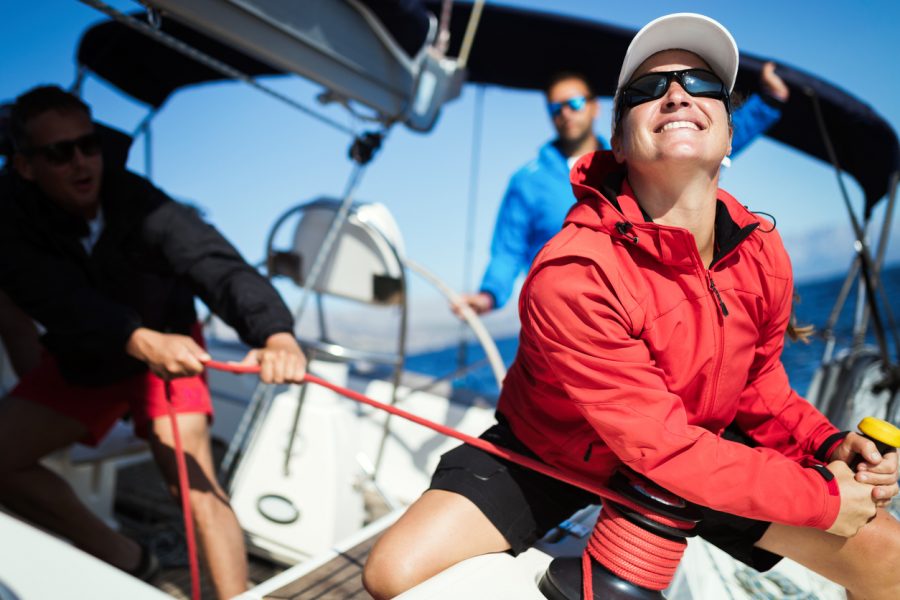 Let’s Go Sailing is an ASA affiliate school.
Supporting the Lake, Bay and Gulf since 1988